Currently painted in the colors of FP-680 (AF63-7680), the jet flown by Robin Olds during Operation Bolo, F-4D Phantom II, AF65-0749 is being flown by Ret. LtCol. Jerry 'Jive' Kirby with passenger Lunar Sawyer in the back seat. One of the only civilian-operated Phantoms in the world, it took an act of Congress by means of an amendment to the Defense Authorization Bill of 1999 to allow the Collings Foundation to acquire and operate its F-4 Phantom...Flown by Paul Wood on the right wing, the Warbird Heritage Foundation A-4B Skyhawk BuNo 142112 is currently painted to represent aircraft BuNo 148609, an A-4C flown by LCDR Ted "T.R." Swartz, a member of Squadron VA-76, operating from the aircraft carrier USS Bon Homme Richard (CVA-31) during the Vietnam War. On May 1, 1967, LCDR Swartz shot down a MIG-17 over North Vietnam with an unguided ZUNI rocket. This was the only air-to-air kill by a Skyhawk during the Vietnam War. ..On the left wing, operated by the Collings Foundation and flown by Jared 'Rook' Isaacman, with back seater Ret. LtCol. Mike 'Buick' Eberhardt, TA-4F BuNo 153524 represents the paint scheme carried by the aircraft of H&MS 11, the Playboys, based at DaNang during the Viet Nam war...In trail is a second element diamond formation made up of Paul Keppeler in the arctic camo T-33, right wing is Scot Zamolyi in the sold grey L-39 #117, left wing is Doug Demko in the blue camo L-39, and taking on the slot position is Larry Labriola in the green camo L-39...Photoflight Sponsored by United Bank Card Inc.. Photoship is B-25 Pacific Prowler piloted by Doug Rozendaal. 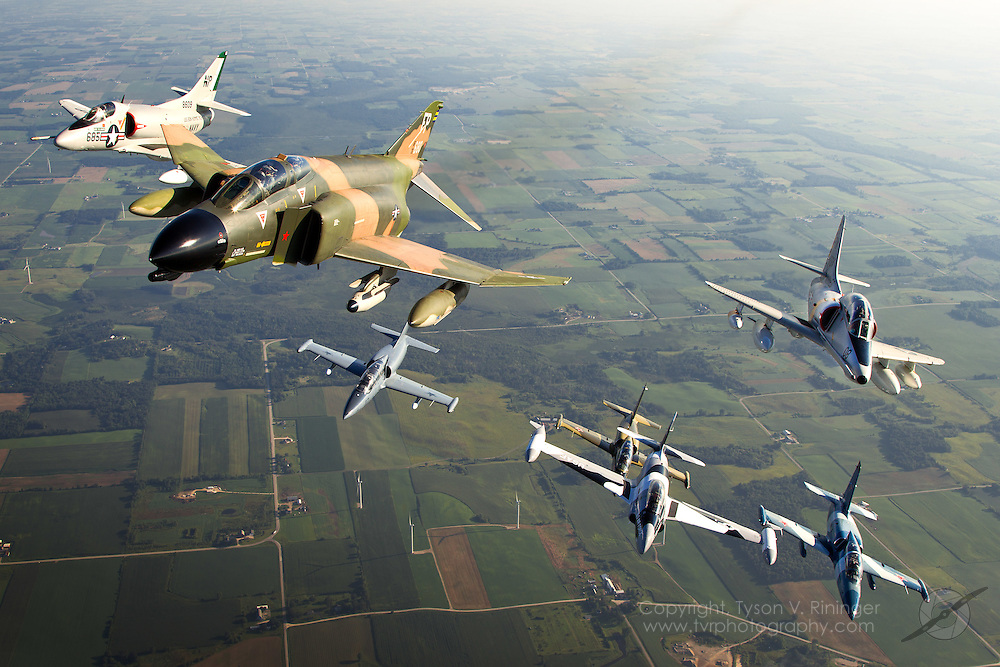