This 1929 Ford 4-AT-E Tri-Motor, registered NC9612, has a unique and storied history. In 1929, it was delivered as a new passenger plane to Mamer Flying Service in Spokane, Washington. It was later sold to K-T Flying Service of Honolulu and was at Pearl Harbor on December 7, 1941, where it suffered superficial bullet holes from Japanese strafing. Brought back to the mainland in 1946, it was leased by TWA for their 1949 20th Anniversary celebration. It then went to an agricultural operator in Idaho and was modified to a sprayer and also as one of the pioneer forest fire fighting air tankers. Johnson Flying Service in Montana flew it for several years to drop Smoke Jumpers and supplies to fire fighters. Since 1969, the plane has been privately owned, hangared and was part of the Wings and Wheels museum collection previously located in Orlando, FL. This was a no concession, no compromise restoration in which the airframe was reworked, a new interior installed and the exterior completely re-skinned, with most work being performed under the supervision of Master Restorer Bob Woods of Woods Aviation in Goldsboro, NC. The wings were reworked and re-skinned by expert craftsman Maurice Hovious of Hov-Aire in Vicksburg, Michigan. The landing gear, including the unique Johnson bar braking system, is complete and original. The original straight-laced wire wheels have tires that were re-sculpted to replicate the correct profile and tread pattern of the period. The wood paneling of the interior has been skillfully re-created. There are no modern avionics or communications gear - just what came with the plane when it was delivered from the Ford factory in January of 1929. Exhaustive efforts were made to ensure originality in every detail with assistance from Tim O'Callaghan of the Henry Ford Museum and American Aircraft Historian Bill Larkins, author of "The Ford Tri-Motor" book. Also assisting were Retired Eastern Airlines Captain Bob Beitel and Retired Admiral Witte Freeman of t 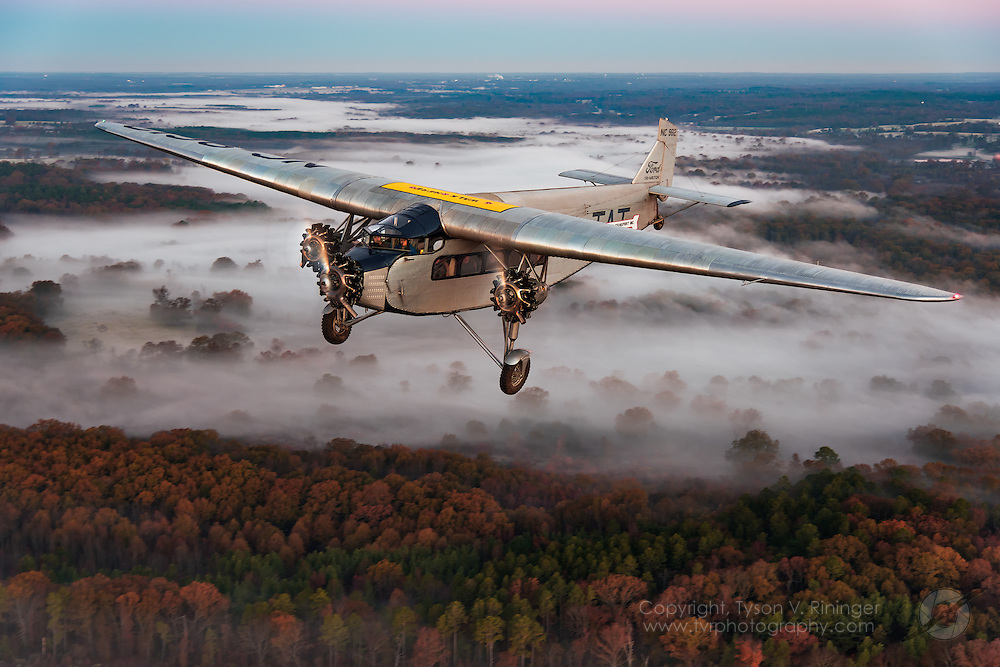